Can A Dog Be Litter Trained? 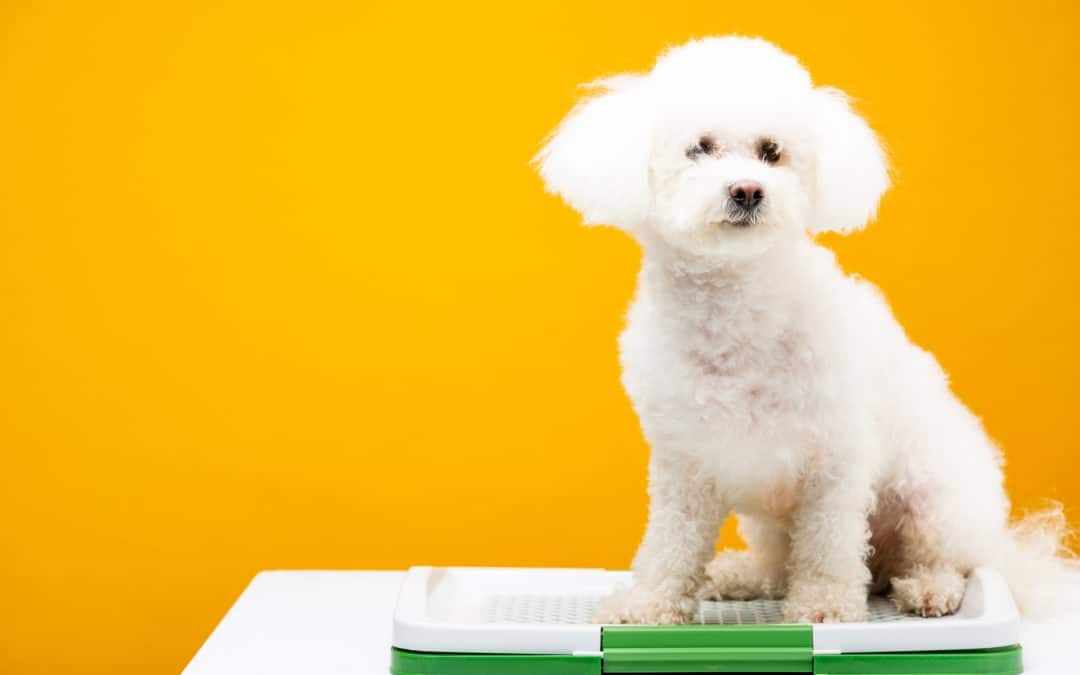 We may earn money or products from the companies mentioned in this post.
5 shares

Some people, experienced trainers included, feel that puppy pads and other indoor potty areas can confuse your dog, making her think it’s okay to relieve herself anywhere she wants in your home.

But I think they’re a lifesaver when you are unable to take your dog outside as often as she needs.

Whether you live in an apartment, have a full-time job outside your home, or live in an area that’s unsafe to walk at night, it’s better to have your dog have an appropriate place to relieve herself indoors than to not be able to take her out enough.

Puppy pads CAN cause confusion. They’re also not biodegradable, and they’re messy to clean up, especially if they leak or if your dog misses.

I like the idea of a doggy litterbox because it is unlike any carpet you have in your home. It simulates going potty in the dirt. So, it’s somewhat less likely to confuse your dog into thinking your whole house is her bathroom.

How Is A Dog Litterbox Different Than A Kitty Litterbox?

A dog litterbox is wider and flatter than a cat’s litterbox. You can also use a baby pool or a large, flat container.

For a cat’s litterbox, the substrate must be deep enough for kitty to bury their wastes.

Since dogs do not bury their wastes, you can get away with using less litter.

There are also special litters available made just for dogs. It’s basically compressed pellets of recycled paper. Absorbent, biodegradable, and wicks away the odor. It’s a smart choice. However, it does not clump, so you’ll have to scoop the poop daily and replace the urine-soaked pellets as needed.

Dogs do not NEED “dog litter.” Cat litter has the benefit of clumping so it’s easier to clean soiled litter, but you might not like the sandy texture, and your dog may make a mess of it if she kicks after she poops.

Yesterday’s News is a cat litter brand, but it’s made of compressed recycled paper just like “dog” litter, and it’s a bit cheaper. It does come in “clumping” but I can’t speak to its effectiveness because I have not used it.

So, while you can use a litterbox full of litter for your dog, I don’t think it’s ultimately the best indoor potty option.

Alternatives To A Litterbox For Your Dog

Litterboxes for dogs probably aren’t very popular because there are already better, dog-friendly options out there.

I’ve reviewed Bark Potty (see price on Amazon) and loved it. It’s a disposable potty that you replace monthly or as needed. It’s basically a cardboard box with mulch-type stuff and a sort of mesh on top. Pee absorbs into the mulchy layer, and poop stays on top so you can scoopy-scoop the poop.

You can also get a live grass patch for your dog called Fresh Patch. It’s definitely a good way to enforce a “we only pee on grass” policy.

However, it’s a living thing, and even though you don’t have to tend to it, I’m sketched out at the idea of having dirt and live grass shipped to me from elsewhere. What organisms might be living in that soil?

You can also get a fake grass patch. I have one. It’s a plastic tray and it has a patch of fake plastic grass on top. Pee falls through the grass layer and onto the tray, so you have to drain the pee to clean it. Or, you can put a pad underneath.

Matilda hates the fake grass patch. She does not like the way it feels on her paws. In the wintertime I fold a puppy pad in half and place it on top to trick her into using it.

Will My Dog Stop Wanting To Pee Outside?

You can use both an indoor pottying system AND walks to keep your floors dry.

What I love about an indoor potty is that it makes it easy for you to tell when your pup has to go.

When I’m home during the day, and I see Matilda run to her potty area, I can say, “Actually, let’s go outside now,” and we’ll take a potty walk instead.

But most of the time, Matilda prefers to go outside. It’s such a waste of poop and pee to go indoors when there’s a world that needs marking!

Matilda only wants to use her potty at night or when I’m away for many hours.

We have a good system going. Some people do not like the idea of indoor pottying. But I like knowing that my dog never has to be in pain waiting to go for a walk. I also like that if she’s ever recovering from surgery or gets ill, she can use her potty.

How To Litter Train Your Dog

If your dog is new to using a litterbox or a similar indoor potty system, and she has used puppy pads before, you can simply put a pad over the box for a few days, then fold or cut it in half so she has to walk over the regular litter to use it. Pretty soon, she’ll use the litterbox without a pad inside.

If you have a new puppy, or your dog has never used any indoor potty system, including pads, you’ll need to infuse the litterbox with her scent. To do this, you can place her pee and poop in the box.

You should also praise your dog anytime she goes near the box. Encourage her to go inside it when she wakes up in the morning, after mealtimes and throughout the day.

If your dog is trained to potty outside, but you’d like her to learn to go inside, you can place the potty outdoors on the porch or patio and encourage her to use it indoors. After she does, you can bring it next to the door, just inside the door, and gradually move it to your preferred location.

← 3 Ways To Use Up Leftover Canned Pumpkin For Dogs I Found A Flea On My Dog... What Do I Do?? →
Lindsay Pevny