Do those ears hang low?

All puppies are born with their ears flat against their head.

Between 4 and 7 months of age, if your puppy is meant to have prick ears, they will usually stick up. It can take up to a year for a puppy’s ears to stand.

Some puppy’s ears stay floppy forever, even if prick ears are characteristic of their breed. There are some ways you can encourage the ears to stand tall.

Naturally, you’ll love your puppy no matter what – even if her ears stay low and floppy for her whole life.

If you’re planning to show your dog, floppy ears might be a disqualifying feature, depending on your breed. This is true for Chihuahuas. Some breeds are allowed to have floppy ears in the show ring, though.

Floppy ears are more prone to ear infections, as moisture gets trapped inside the ear canal and becomes a breeding ground for bacteria. However, both prick and floppy eared dogs can get ear infections, particularly if they suffer from food intolerances.

You might just have a cosmetic preference for dogs with prick ears. There’s nothing wrong with encouraging your pup’s ears to stand to suit your personal tastes, as long as you have realistic expectations and plan to accept your pup’s quirky ears if you’re not able to perk them up. 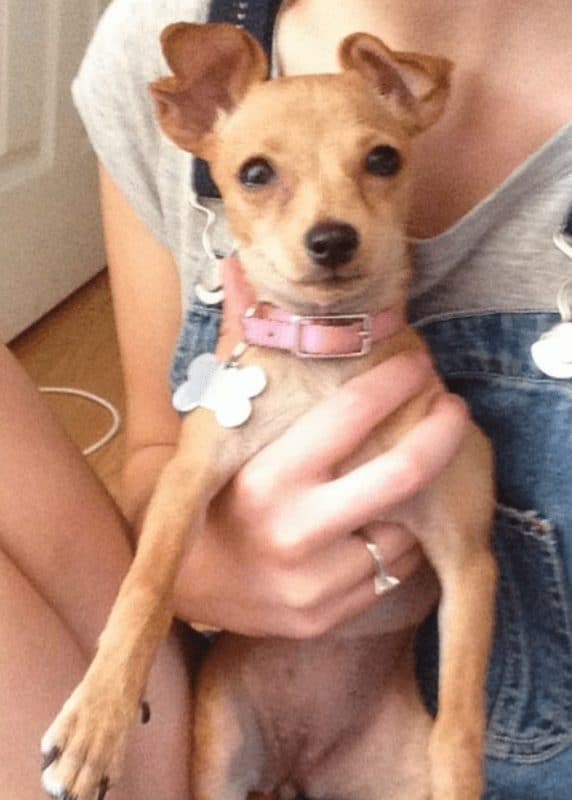 Matilda at 4 months of age. By 5 months, her ears were completely up.

No Massages For Floppy Ears

It’s unclear whether massaging your puppy’s ears would help them stand. Generally, it seems that breeders and veterinarians feel that ear massages break down the cartilage, preventing the ears from standing. There’s no hard proof either way, but to be safe, I’d try not to mess with them.

Taping Your Puppy’s Ears To Help Them Stand Erect

The most popular solution to floppy ears is to tape them up until they stand up on their own.

Taping is not always successful. Some ears will never stand, no matter how long you tape them, because they are set too wide apart on the head. It may be too late for it taping to work. Or, if it’s done improperly, or if the taping causes your puppy to constantly paw at their ears, all of that messing around may weaken the cartilage.

Some people tape across the base of the ear, others fold the ear lengthwise, like a taco, and tape them that way.

If you’re going to tape, use tape with a relatively weak adhesive, like medical tape or masking tape. You might want to trim your pup’s ear fur to reduce stickiness, and to decrease any weight that might tug the ears down. People have used everything from popsicle sticks and cotton swabs to tampon applicators to get those ears up. Some people swear by nasal strips.

There’s no strong evidence as to what method works best, nor is there really any evidence that taped ears would not have stood up on their own.

Don’t underestimate your puppy’s ability to remove the tape and eat it. The ears are typically taped for one week at a time, then reapplied until the ears stand on their own. So, be careful about leaving your puppy unattended with taped ears until they’ve become accustomed to it.

All that said, I don’t believe taping is usually worth the trouble. Not to say it’s more than a minor inconvenience to your dog – I just wouldn’t bother.

Cropping, or having a vet surgically remove a portion of your puppy’s ears to make them stand up, is typically done when your puppy between 7 and 16 weeks of age. It’s not really a solution for older puppies with floppy ears, it’s more of a tradition for just a select few breeds.

As with any surgical procedure, there are risks. Your puppy have a bad reaction to the anesthesia, will be in some amount of pain afterwards, and could suffer from an infection.

You may consider cropping your dog’s ears if it’s necessary for participating in dog shows.You might do it to prevent ear injuries and infections, especially if you have a working dog. I’m personally against it and dislike how it looks, but I wouldn’t judge anyone for having a dog with cropped ears.

Strengthening the cartilage in your puppy’s ears through the use of dietary supplements can be helpful – but again, there’s no solid data on whether this will work.

Foods that contain cartilage include: chicken feet, duck feet, pig ears and trachea. All of these can be fed raw or dehydrated/baked/smoked. The cooked bones found in most pet stores are prone to splintering, so take care if you choose to feed them.

If Your Puppy’s Ears Never Stand Up…

Your dog can have corrective ear surgery at any age, with a mesh implant called PermaStay, made by Neuticles (yes, THOSE Neuticles.)

But when it comes down to it, floppy ears do not seal a fate of constant ear infections. In fact, you’ll probably grow to love them. They can be very expressive, perking up when your dog hears interesting noises, and drooping when they’re sleepy.

According to me, I don't care for trimming a canine's ears by any means, it appears to be fairly pitiless. I'd preferably not show my pooch over put him through that. Extremely intriguing data, I've never pondered canine ears. Possibly on certain breeds. I am simply happy our mutts' ears slump and hang.

My Scottie dog is amost 7 month old, he has one droopy ear, will this stand up eventually?

Hey Lindsay! I didn't know that it really matters for dogs' ears to flop and stand? Maybe on some breeds, it does matter? I am just glad our dogs' ears flop and droop. Never to worry about cropping or surgery.

Oh my goodness, I can't imagine caring this much about the position of my dogs' ears! I guess if you want to show your dog you have to try some of these methods. I do not like cropping a dog's ears at all, it seems rather cruel. I'd rather not show my dog than put him through that. Very interesting information, I've never thought that much about dog ears - floppy or erect, they all look beautiful to me!