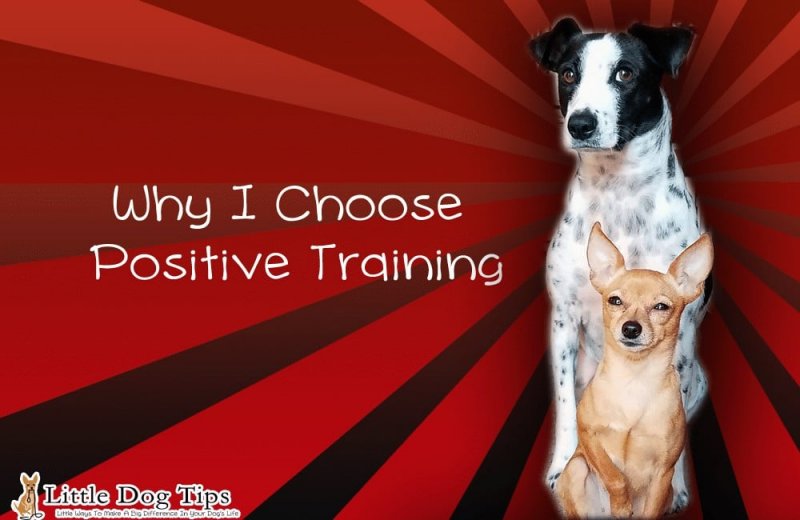 I call Little Dog Tips a blog about “positive training for small dogs,” but until now, I haven’t quite defined positive training, what it means to me, and why I choose to write about it.

Positive training is short for positive reinforcement training. It relies mostly on the use of rewards for training behaviors, as well as teaching them to practice good behaviors instead of unwanted ones.

My preferred methods of training are also inspired by the idea of positive thinking – being optimistic and concentrating on the good instead of the bad.

It’s important to understand that dogs will never disobey or fail at tasks because they hold a grudge, do not like their human, or feel the need to rebel or become the “alpha.”

Dogs fail when we fail. They growl, bite and bark when they’re scared, or when they have not yet been taught to control and re-channel their natural urges and instincts.

It’s also important for humans, as the more intelligent, more advanced species, to control their anger and frustration when dogs do not do what we want or expect.

Positive training is often referred to as “science-based,” and “modern.”

Old-fashioned dog training is based on the idea that dogs adhere to a strict pack hierarchy within their human families. A dog that seems like they’re not listening was believed to be “dominant,” often because their owner was not enough of a “strong leader” to control them.

Modern trainers realize that behavior can be reinforced or discouraged by both environmental and owner-given influences, organized neatly in B.F. Skinner’s Four Quadrants Of Operant Conditioning.

Positive Reinforcement R+ : a pleasant stimulus reinforces a behavior so the dog will keep doing it. Your dog digs in the trash because there’s yummy snacks inside. They sit on command because you give them a treat. Positive, because something is added; reinforcement, because a behavior is encouraged.

Positive Punishment P+ : an unpleasant stimulus discourages a behavior the dog will stop doing it. Your dog stops bugging the cat after getting scratched on the nose. They stop barking at the mailman because you squirt them with water. Positive, because something is added, punishment, because a behavior is discouraged.

Negative Reinforcement R- : an unpleasant stimulus is removed to encourage a behavior. A dog feels an unpleasant itch, so they’ll scratch to get rid of it. In the force-fetch method of training hunting dogs, the trainer pinches the dog’s ear until they open their mouth to yelp, then they shove the object inside the dog’s mouth. They stop pinching when the dog holds the object. If the dog spits it out, they pinch and repeat.

Negative Punishment P- : a pleasant stimulus is removed, so the dog stops doing a behavior. Your bitey puppy loves playing with you, but you get up and walk away when they bite your fingers. You tell your dog to sit, but they don’t, so you don’t give them a treat. Negative, because something is removed, punishment, because a behavior is discouraged.

Numerous research studies suggest that Positive Punishment and Negative Reinforcement, while they certainly can be used to stop or encourage a behavior (or else, people would never use them at all)… they’re the most likely to cause fear and aggression.

But science has so much more to offer than telling us what methods are preferable in dog training.

We’ve also learned that playtime after training increases retention, so your dog will remember what you taught them.

Dogs can learn to respond to words, but visual markers like hand signals work much  better.

Dogs learn more quickly and retain training better when they get 1-2 weekly training sessions, rather than daily lessons or multiple lessons each day.

Take care when reading a research study before you apply it to your training. Some studies are conducted with just a handful of test subjects of the same breed.

Science-based, positive training isn’t just reading studies and learning your quadrants. It’s also about observing your dog in a scientific way, rather than taking it personally when they fail or succeed.

When Should We Judge Dog Trainers, Owners And Parents?

Personally, I don’t have strong feelings about other people using corrections, prong collars and shock collars to train their pets. I do believe that they should be used temporarily, if at all, and alternative, positive methods should always be used first.

And yet, I don’t really care that much.

I do judge others when they pride themselves on a lack of formal education, and spread misinformation to dog owners who do not know any better. I judge those that endorse or sell products that could be abused without properly informing customers of the risks, and the care that must be taken when using them.

Positive Training Has The Best Leaders

While there is no formal certification in the United States required to become a dog trainer – you can simply say you’re a trainer and start taking clients – there’s plenty of reputable organizations which stand behind positive training methods, including the Association Of Positive Dog Trainers (APDT), Certification Council For Professional Dog Trainers (CCPDT) and the Pet Professional Guild (PPG).

Guide Dogs For The Blind has made the switch to positive-reinforcement, clicker-based training, and their success rate has soared.

Using traditional methods, roughly 45 to 50 percent of the dogs entering the formal training process made guide dog status. With the incorporation of clicker training (one type of positive reinforcement), 60 to 85 percent graduate and are successfully paired with a blind partner. ~ The Bark

A few groups are endorsing the use of force-free, positive-only methods for training police dogs and hunting dogs.

I have two final reasons for choosing positive training, and their names are Matilda and Cow.

Dog ownership has become so much more enjoyable since I learned that I do not have to show them who’s boss or punish them when they’re just trying to communicate that they are scared or confused.

That’s the best reason to go positive. Because it’s a relief when you discover new ways to train, and do not truly have to do anything that does not feel right.

very interesting! thanks for sharing

I thoroughly enjoyed this blog, Lindsay. I would like to thank you for sharing this message and making it easy to understand, filling it with information and enjoyable to read. I especially loved your ending, it's so inspiring!

I'm on a mission to share about positive reinforcement training and I want to inspire and build rather than point out the differences between people. From reading couple of your blogs, I feel like you have a similar approach. Thank you for being you

Thanks for your nice Article. Really this post was verify informative. Can you tell me where I will so Advance Article or series Article . Keep it up your Writing. Thanks

very nice and attractive articla thanks for sharing..

very nice and attractive article thanks for sharing this wonderful piece of work...