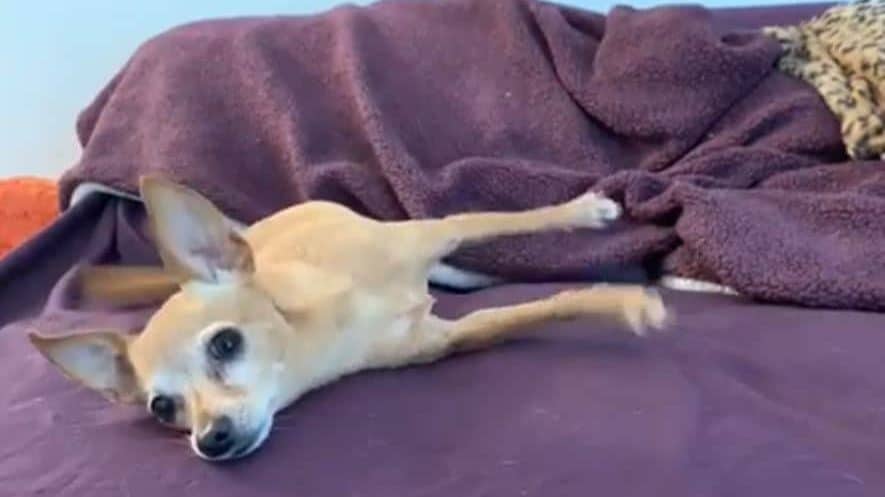 We may earn money or products from the companies mentioned in this post.
135 shares

I can’t believe I’ve never written about one of Matilda’s favorite tricks.

Because when you use positive reinforcement, you raise a dog who loves to learn and practice cues.

But that’s not even the real reason she enjoys it so much.

Matilda is a dramatic lady. She love attention, and she loves big displays of emotion. She always lets me know how she’s feeling.

So, of course she has a “play dead” performance that deserves at least an honorary mention at the Oscars.

It was so easy to teach, too. She learned “play dead” in just one training session when she was about six months old. (At the time of posting, she’s over 5 years old, born on May 4th, 2014.)

You, too, can bring out your dog’s thespian talents by teaching her to play dead.

How To Teach Your Dog To Play Dead

Before you start, visualize exactly what you want your dog to do.

Some dogs are comfortable with behind completely upside down, on their back. They may even choose to sleep that way. If your dog is like this, you might want to shape their “play dead” to look like that.

For Matilda, being completely on her back isn’t comfortable. So, I decided to let her lie still on her side instead.

You can use a treat to lure your dog into the desired position. If she doesn’t immediately seem to understand, you can break it down by luring her to first lie down a few times.

Then, develop that into lying down and rolling over just a quarter of the way.

As she gets the hang of it, you can start to ask her to roll over a bit more.

“Belly up” is a vulnerable position for a dog. It’s understandable if it takes a few tries for your dog to willingly roll over on command.

Avoid using any physical touch to move your dog into position. You can, lightly, if you think your dog needs guidance, but there’s a reason we generally want to stay away from using even gentle physical force.

First, it can make your dog feel uneasy if it feels as though you’re rolling her onto her back.

Second, it removes the “muscle memory” part of practicing the trick. Allowing her to do it herself will allow her to pick up the trick sooner.

Dogs learn and respond best when you use both a voice command and a hand signal.

Once your dog seems comfortable following a food lure into the correct position, you can see if you can use your hand as a target, then give her a treat with the opposite hand.

That way, your dog is learning to follow your hand movements, rather than just doing whatever it takes to keep her nose on the treat.

As your dog gets good at following your hand target, you can start to add a cue like “play dead!” and a hand signal. I point at Matilda as though I’m shooting a gun, as though I’m miming a dramatic assassination.

Why wait this long to use the hand signal and vocal cue? You want your dog to have the action down first, then you can link the cue with the correct positioning. It’ll be more clear to her that way, and much easier on your vocal cords.

Of course, it’s not convincing enough for your dog to flop over on her back, and then immediately get up.

She needs to be able to hold as still as possible until you “release” her.

Matilda can’t seem to stop kicking her feet and wagging her tail. I don’t have a solution for this, and quite frankly, it adds a humorous effect.

After you’ve done the above, you can add a release word. At first, I accidentally released Matilda on “good girl!” so I needed to re-teach her. When she was successful, I quietly told her “good girl” and then, after a few moments, added a release cue “okay!”

Then, you can slowly build up the time increments between “play dead!” and “okay!”

If your dog gets up before you can release her, just start over and try again – no treat. See if you can get her to stay down for just a half-moment longer. If this keeps happening, make it as easy as possible. You want to set your dog up for success.

It can also help to ask your dog to “stay” after she gets into position. She might be able to understand it in this context.

I can’t take credit for this idea.

Matilda somehow, of her own accord, decided to enhance her “play dead” with a theatrical moan.

It could be from the effort of the motion, the anticipation of the treat, and/or the excitement of completing the trick.

I encourage her to add sound effects by practicing her “speak” and “I love you” right before, or even telling her to “speak” just as she’s flopping over to “play dead.”

If your dog doesn’t know a “speak” command yet, ummm…

Matilda learned “speak” when she was about four months old. At that time, she rarely barked.

It’s like when you hit “Print” a bunch of times because your printer doesn’t seem to be working, and then 10000 copies come out all at once and it just. won’t. stop.

Now, Chihuahuas are barky little dogs, so I don’t think teaching her “speak” turned her into a vocal little lady, but just consider yourself warned. If you’re not careful, you may teach your dog that barking is a good way to get attention and treats.

Pin it for later!

← Are Puppy Pads Appropriate For Adult Dogs? How Long To Stay At The Dog Park... And What To Do While You're There →
Lindsay Pevny