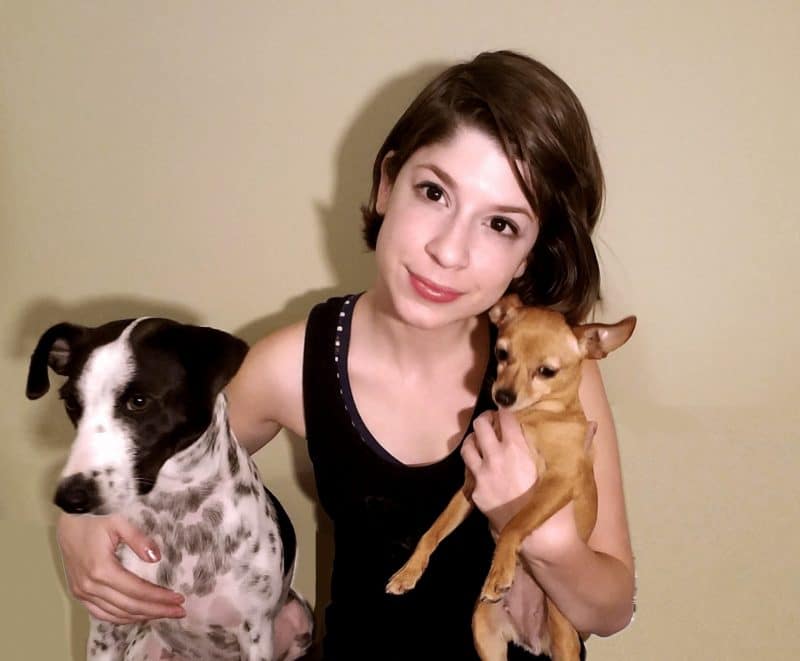 Author Mark Twain was once quoted, “the more I learn about people, the more I like my dog.”

People disappoint us. Many of us turn to the companionship of animals when we feel misunderstood or betrayed by our fellow humans.

Dogs cannot insult us, judge us or lie to us. We feel safe to tell them our most intimate secrets, and we never have to worry about saying or doing the wrong thing.

And yet, in recent years, I’ve began to change my outlook.

Learning about positive training when Matilda was a puppy taught me about reading the intentions, desires and motivations of my fellow humans – rather than antagonizing them when they don’t behave as I want or expect.

What I Learned About Dogs

When I was younger, I read a lot of books from my local library about dogs. I learned that, when a dog does not obey, they must doing it consciously. They may try to dominate their owners, because if you do not assert your ranking as Alpha, your dog will naturally begin to take on the head role of your household.

Not only is there no scientific evidence to support that idea, it puts us in a toxic mindset.

When dogs do wrong, the Alpha idea leads us to believe that they are doing so purposefully. We have been told that dogs have bad intentions and express disrespect.

Now, even dog trainers who do not identify as “positive trainers” at least base their methods on science, not the unproven and incorrect “Alpha dog” idea. A dog that does not obey simply needs more training. It’s our job to show them how to make wise decisions.

Maybe it’s the same for humans. When they seem to disrespect, disobey or abandon us, their intentions might not always be as bad as we think. When I can’t tell, I feel better and make wiser decisions when I assume their intentions are good.

Some humans apologize constantly – others, never.

An apology is rarely what we believe it to be: when someone knows they’ve done something wrong, they ask for forgiveness and avoid doing it again.

An apology is really: when someone has done something they know is perceived as wrong, and they wish to avoid a consequence.

Maybe they feel remorseful. Maybe they don’t. It’s nice to get an apology when you feel you’ve been slighted because the other person is acknowledging how you feel.

It’s awful when you feel you’ve been slighted and you want, even expect an apology… but never get one.

And yet, we never expect dogs to apologize. They can’t.

Well, there’s those popular dog videos in which an owner comes home to a destroyed house and a “guilty” looking dog. Those owners might feel a little better about the damage with the belief that the dog is remorseful… even though those guilty looks actually signal fear.

Loving dogs means I no longer want or expect an apology from a human.

Sometimes, I do hope for a change in behavior, and now I realize that there’s many ways to encourage it, though overall, you can’t make anyone do anything – not even a dog.

When my dogs don’t act as they should, I look at their environment, and more importantly, myself, to see what is causing undesirable behaviors. That’s the biggest way to move forward in their training.

Dr. Phil may not be a real psychologist, and his qualifications eerily remind me of a Cesar Millan for humans… but he’s right about one thing.

You teach people how to treat you. ~ Dr. Phil, TV “Psychologist”

Sometimes I need to set an example. If I wish someone talked to me more, I’ll reach out first, even if it’s difficult – maybe it’s difficult for them too, and they’ll be relieved that I started the conversation.

When I find it difficult to get along with someone, I recount how I’ve acted around them, and wonder what I may have said or done to make them act in such a way. I may decide to set boundaries, change how I’m behaving, or have a heart-to-heart with them.

If that fails, I consider their environment and how they’ve been treated by others.

I’ll go mad if I forever blame a difficult person’s actions on myself, however. As with dogs, it’s important to avoid taking anything personally.

Sometimes, you have to accept what you cannot change. You can’t ask a heeler to point, and you can’t ask a pointer to pull a sled.

The best thing I’ve learned about dogs: always appreciate those you love.

When you see your loved one, even if it’s been just another day at work, do your happy dance.

A dog’s life on earth is short, and in most cases, our relationships with other people are too.

I also find that I changed how I see people since I started to learn about positive dog training and even more so when I'm learning about behavior analysis. Thank you for sharing this message and inspiring others to maybe see it in a different light too.

That last paragraph really hits home with me. I never knew what being unconditionally loved was like until I got my dog. He's also taught me a lot about loving other people despite their flaws or missteps and to live in the moment!

I really enjoyed this article. Learning from our pets is a great way to evolve ourselves. I loved the connections you made, especially about the apology. Nicely done.

"When my dogs don’t act as they should, I look at their environment, and more importantly, myself, to see what is causing undesirable behaviors. That’s the biggest way to move forward in their training." It's so true that dogs are, to a big degree, a product of their environment. But then again, aren't we all?

I like your statement: "Sometimes, you have to accept what you cannot change. You can’t ask a heeler to point, and you can’t ask a pointer to pull a sled." This happens when guide dogs are career changed. No matter what you do sometimes you can't change a dog's behavior. Not all the dogs we train are meant to be guide dogs.