Why Are Chihuahuas So Aggressive? 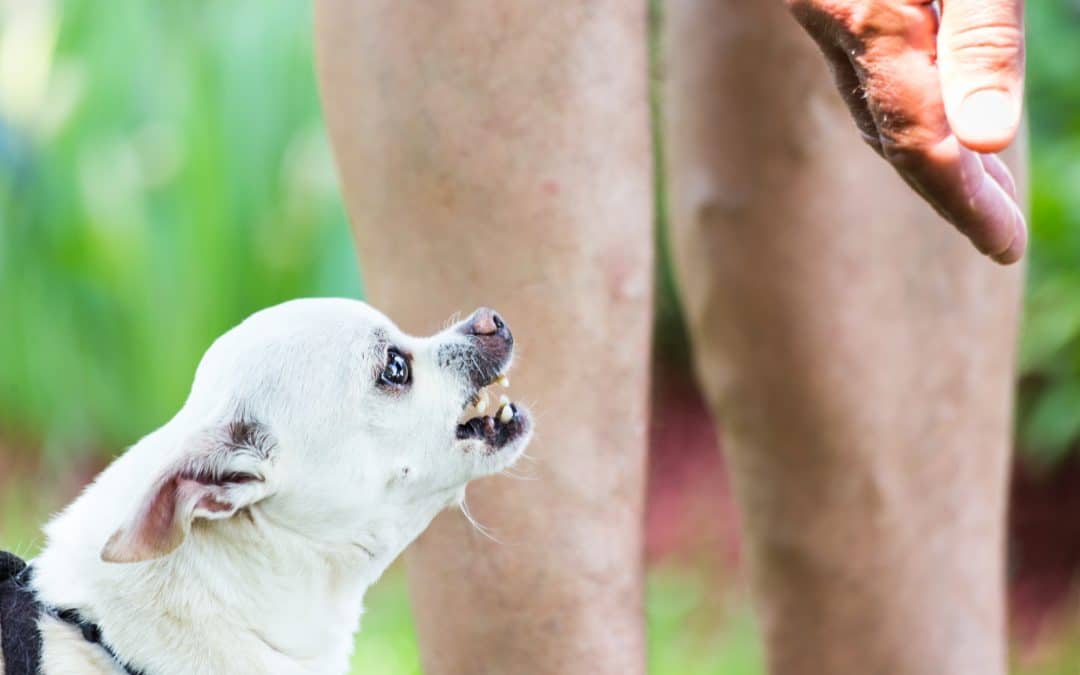 The 90s were a weird time for Chihuahuas.

The Taco Bell dog was “Yo Quiero Taco Bell”-ing his way into our hearts, and meanwhile, Paris Hilton was strutting around with tiny Tinkerbell peeping out of her designer purses. Soon after, Bruiser lit up the big screen on Legally Blonde.

In all of these instances, Chihuahuas weren’t really represented as, well, dogs. They were sidekicks, accessories, or supporting characters.

We certainly fell in love with them, and some fell out of love with them as they became the second most euthanized breed in the United States.

Why Are Chihuahuas So Badly Behaved?

Chihuahuas seem to be harder to fully potty train than most other breeds.

They often suffer anxiety issues that manifest as aggression, and they seem to cling to their primary caretakers, slow to warm up to new people.

There’s no solid evidence, no single reason for why Chihuahuas are this way.

Partially, it’s our fault. Collectively, Chihuahua parents do not take their dogs seriously enough to take the time to research the breed before adopting, to invest time and money in training, and take the time to learn about dog behavior.

But it’s not all in how you raise them.

Reputable breeders take a few things into consideration when they breed the next generation of Chihuahuas. The parents must pass genetic health testing, must have the right appearance for conformation, and they must have a good, stable temperament.

Chihuahuas, however, are often bred by backyard breeders who buy dogs and breed them without health testing and regardless of temperament to make a quick side income. These types tend to breed the smallest possible dog, market them as “teacup Chihuahuas,” and sell them off.

They’re also bred by “oops” breeders who may want their children to see a litter being born to educate them about the circle of life, or by those who simply did not keep their dog safe from unwanted, unplanned pregnancy.

As those poorly bred Chihuahuas grow up, they may not get the mental stimulation, education, and most of all, respect, that other dogs do.

I saw it firsthand while I was raising Matilda.

I tried to introduce her to children, but faster than I could react, they would smack her or pull her tail.

And it wasn’t just kids.

Grown adults would wave their fingers in her face as though provoking her to snap. I’d never owned a dog this small. I’ve never seen people act this way. I totally didn’t see it coming.

We don’t interact with strangers anymore. But now she barks at them because she doesn’t trust them, and well… why should she?

Why Chihuahuas Are So Aggressive:

They commonly have grown up with larger dogs, once denounced, “I don’t like small dogs,” only to be charmed by a trembling, burrowing bundle of joy.

Well, there was this one lady in one of my Chihuahua groups who had never let her chi’s paws touch the ground outside. She had lost a (human) daughter at a young age, and unfortunately her trauma had lead her to become incredibly overprotective of her pup.

It’s okay to think of your dog as your baby. It’s okay to coo over her, snuggle with her at night, and do whatever you need to do to express your love for her in just about any way you’d like.

But just like dogs of all sizes, Chihuahuas need mental stimulation. They need training. They need boundaries.

Chihuahuas may have little legs, but they’re capable of running for miles, climbing mountains, going on hikes, doing agility… just about anything a larger dog could do.

You Did What With Your Wiener is a blog about hiking with dachshunds. Not Chihuahuas, but it’s perhaps even more unexpected for a long little doggy to take on miles of terrain. Jessica’s dogs have been doing it for years with no problem. Why can’t we?

ChiPets is a Chihuahua blog owned by Kama Rueschenberg, who competes in agility trials with her Chihuahuas. They’re amazing, especially on the big A-frame – absolutely fearless, and totally unstunted by those little legs.

While it’s perfectly fine for your Chihuahua to hang out in your purse or wear frilly outfits, they also need time outdoors and a bit of exercise to satisfy their need to be physically and mentally stimulated.

If not, your little purse goblin is just a ticking time bomb, waiting for an opportunity to put those natural instincts to work.

Why Are Chihuahuas So Aggressive?

You’ve probably seen those viral videos in which someone teases their Chihuahua, causes them to growl and bare their teeth, and then they proceed to egg the dog on for the video.

Naturally, the person behind the video has coerced their dog in this way before, and thought it was cute enough to repeat and upload to social media.

If any other dog growled, any good dog parent would remove the stimulus, put a stop to whatever is making the dog uncomfortable, and possibly work on that issue through counter-conditioning and desensitization, hopefully with the help of a certified force-free dog trainer.

Some displays of aggression, though, are just warnings.

For example, if Matilda is in the middle of eating a tasty bone, and it’s time for me to take it away, she growls and stiffens up to let me know that she’s not happy about it. I talk to her calmly and trade a bite of something equally yummy so she has learned that she can trust me, that I never steal food from her.

She still growls at Cow when Cow walks by, and for good reason – if she didn’t, Cow would certainly try to take her food. To prevent scuffles, I separate them during mealtimes. How could I ever ask Matilda to NOT get upset when she thinks her food is going to be stolen?

I would, however, like Matilda to warm up to people faster. She and Cow bark at guests in my home, and it takes many visits for them to start to sit on their laps and lie next to them.

Of course your dog, originally bred as a companion and alert dog, isn’t going to trust everyone who walks into your home or crosses your path. It’s not usually so much that they’re aggressive, it’s usually just their natural instincts to be protective.

I don’t expect my dogs to ever be like Golden Retrievers, falling in love with everyone they see. If I wanted that kind of dog, I would have gotten one.

Instead, I take my dogs for walks in the park with new friends before we spend time in my home. That helps immensely. If my dogs are comfortable with it, I ask new friends to give them treats and ask them to do their tricks.

I get a little nervous when the doorbell rings, especially if I’m not expecting anyone. Shouldn’t my dogs?

It’s incredibly difficult for dogs to learn anything when they’re in a heightened state of arousal, though.

That’s why we see people yell at their dogs for barking and growling, only for nothing to change.

Before any learning can happen, you have to invoke a sense of calmness. Nonviolent, reward-based training always going to be the best way to do that.