Over the past six months, I’ve been feeding Matilda and Cow a homemade, balanced raw diet. They’ve been thriving, and I’ve finally learned, experimented and fine-tuned the process enough to start sharing with you what exactly they have been eating, and how I choose each ingredient.

But before I start writing about what they eat, I wanted to share why they eat it.

Every raw feeder has a why. It might be because a commercial diet made their dog sick, or because they’re a breeder and want to raise the healthiest, best quality pups. Others have dogs that are shown, or those that do sports, police work, or otherwise need to look and feel their best.

But my personal reason for feeding my dogs raw is kind of unique.

No, it wasn’t because of the constant dog food recalls…

Every month, it seems like another popular pet food is recalled.

In February 2017, Evanger’s and Against The Grain foods were recalled due to potential contamination of pentobarbital – a drug used to euthanize animals.

In March 2017, Blue Buffalo and Wellness foods were recalled because of unsafe levels of beef thyroid hormones.

In June 2017, a class action lawsuit was filed against Blue Buffalo for knowingly selling dog food contaminated with lead.

Dog Food Advisor has a full list of dog food recalls since 2009, and you can sign up for recall alerts if your dogs eat a commercial food.

It’s unclear how these contaminants got into the foods. Even so, only a handful of animals got sick or died from eating these foods, out of the millions of pets that eat kibble and canned foods.

So recalls did not scare me away from commercial dog foods. Though alarming, the risk of my own dogs becoming ill did not seem very high.

It wasn’t my sense of empathy…

Would you want to eat a bowl of greasy little brown rocks for breakfast and dinner, every single day?

My dogs were enthusiastic about eating a new food every time I switched, but eventually got bored of their food. And countless dog owners say their dogs are “picky,” and find it difficult to get their dog to eat kibble… but is that really so surprising?

If you’ve ever gotten bored at breakfast as a kid, you’ve probably noticed that breakfast cereals are a lot like dog food. They’re packed with artificial vitamins, so it seems like you could live off of cereal and get your daily vitamins and minerals, but you’d get bored of it quickly. And you would crave something fresh. Something juicy.

I wouldn’t want to eat dog food. It was becoming difficult to give it to them before I sat down to varied, fresh meals every day. It was hard to do it in good conscience, even during times when they seemed content to crunch on those little brown rocks.

But that’s not why I started feeding raw either.

Well, maybe it had something to do with allergies…

When I chose grain-free kibbles to feed my dogs, I thought I was making a healthy choice. After all, these foods weren’t brightly colored like a kid’s breakfast cereal, and they smelled pretty meaty. The more expensive ones contained more protein than other brands. And the dogs seemed to like it.

After a few months of eating a chicken and turkey based grain-free food, I noticed that Cow was shedding more than usual. Her neck and chest were practically bald. And she was always scratching, scooting her butt on the carpet, or licking her vulva until it was red and irritated.

I discovered that it’s wrong to keep a dog on the same food for months. After eating too much of one type of food, dogs can become intolerant to the ingredients. Chicken is known to be one of the most causes of allergies in dogs, and I had a hunch that Cow was indeed allergic to it.

Cow’s symptoms lessened when I switched foods, and sprayed diluted apple cider vinegar on her itchy skin, but I discovered that even if I switched from chicken/turkey and peas to a formula with a seemingly different flavor, such as duck and potatoes, there would often be chicken fat in the ingredients list.

Then I did the math.

An allergy test at the vet’s would easily cost more than a month’s worth of raw food, and might not even be accurate. Plus, if Cow could spend the money herself, I’m sure she’d go for a shopping cart full of meat, not a scary doctor’s visit. If she didn’t get better, or got worse, I reasoned, we could talk to the vet. 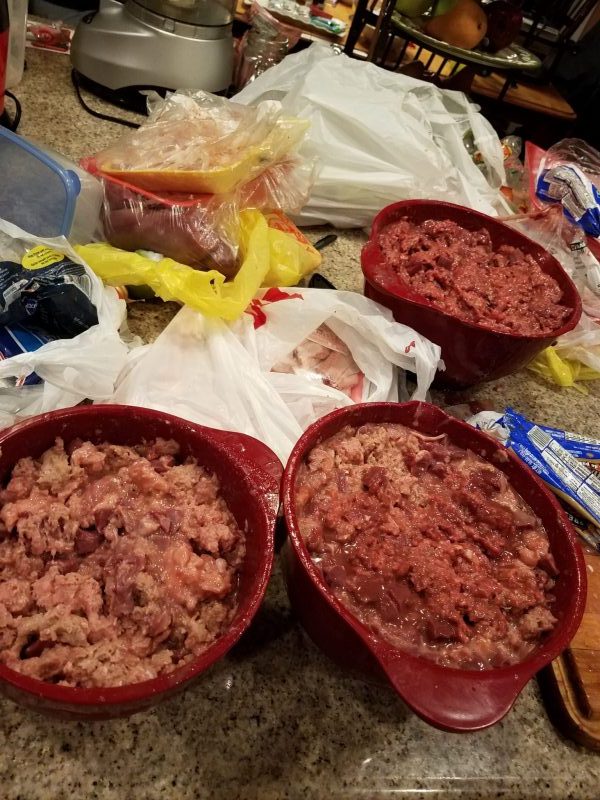 Making raw food at home allowed me to control Cow’s diet. Not only did her itching and hair loss improve, but her coat became silky and shiny. She became more energetic, and I discovered that she was not a lazy dog. She was a poorly nourished one, and now, she was the bouncy, playful pup she was meant to be.

But a raw diet is not the only way to eliminate allergens from your dog’s diet. And it wasn’t the real reason I decided to make the switch. 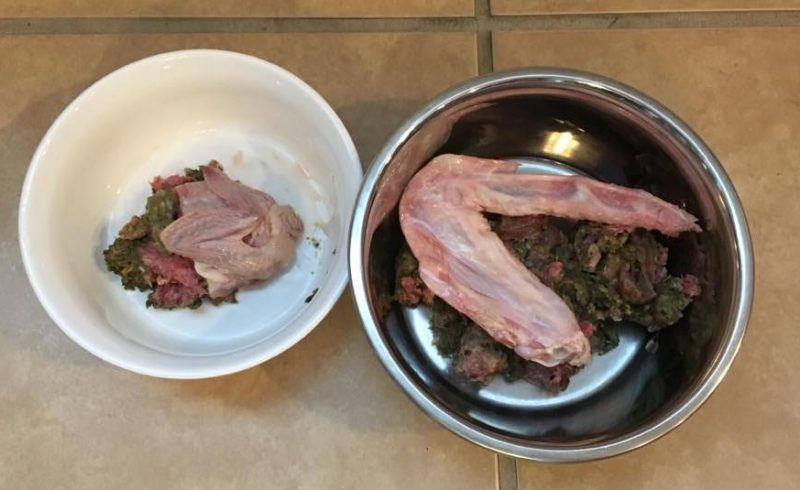 It wasn’t until three months in, that I realized my true motivation for feeding raw.

I still look forward to giving my dogs a raw meaty bone meal. I get great satisfaction in watching them chow down on recognizable animal parts, crunching on bones and pulling stringy tendons from the flesh.

Then, I watched the first episode of a Netflix documentary series called Cooked.

The episode features an aboriginal Martu tribe in Western Australia that spends the week living in somewhat modern homes, cooking food in their kitchens and taking Western medicine for their chronic ailments.

Then, when the weekend comes, the Martu tribe goes back to their roots. They go out into the desert to obtain and cook food as they did in the past. And it makes them feel incredible, they do not feel the need to take their medications. They reconnect with the earth.

This is church to us.

The Martu tribe considers the wilderness their church. They baptize their babies out in the brush – in smoke pits, with fire, not water.

The men went out to the bush and hunted bush turkey and kangaroo with shotguns.

But the women… THE WOMEN.

I was in awe as an elderly Martu woman, wielding nothing but a steel spike, jabbed at a hole into the ground. Was she going to “gather” while the men hunted? Was she digging for root vegetables?

Without hesitation, she reached into the hole. She pulled and pulled… and dragged out a massive monitor lizard by the tail. She pinned it to the ground and another elderly woman whacked the lizard’s head until it stopped moving.

She nonchalantly snapped and twisted each of its paws with a bone-curdling crack. Then, they proceeded to cook and eat the lizard.

She was most bad-ass woman I have ever seen.

That’s when I realized that, long before Cow had any sign of itchiness, I longed to feed my dogs raw meat, and for them to eat food that was closer to their primal diet.

If I were to put aside the science, the biology of a dog’s digestive system, I would still want to feed raw.

Because it is church.

Thank you for posting a recipe for homemade dog food. I’ll have to make that for our dogs. They certainly would enjoy such a tasty meal!

Great article, This article has given me a lot of knowledge about dog food.

very helpful post for our pets. Thanks for shareing.

This is the reason why I rather feed my dogs leftover meat than Dog Food. I just don’t trust processed food for my dogs.